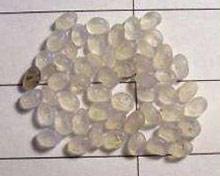 Plastic resin pellets also known as pre production plastic or nurdles are the raw material which is heated and chemically treated to mould plastic goods. Huge volumes of plastic resin pellets are produced and shipped around the world each year. An alarming number of these pellets are constantly being lost to the marine environment both from direct cargo loss at sea and from spillage around factories and transport routes on land. A large proportion of these land spillages eventually find their way into drainage systems and out to sea. At sea pellets are circulated throughout the world’s oceans.

Plastic Resin Pellets are being found on beaches all over the world. Being extrememly small and resembling fish eggs, they have the potential to be ingested by marine animals and seabirds in enormous numbers. The Pellet Alert Project invites volunteers to monitor and report occurances of Plastic Resin Pellets on their coastline, we also receive samples of pellets which are sent on for analsysis of toxins that the pellets may have absorbed while in the ocean environment.

The issue of plastic resin pellet pollution has been well documented. With the help of volunteers from the Tangaroa Blue Foundation and other organisations we have developed a large dataset which shows where these pellets have been found around Australia. We have now started to implement a Source Reduction Plan for pellets in Melbourne.

We are introducing a new and innovative program for the plastics industry in the Port Phillip Bay Catchment called OPERATION CLEAN SWEEP ®. The program offers simple, cost effective solutions to achieve zero pellet loss. If successful the program will become national following in the footsteps of the USA, Canada, Europe and New Zealand.

END_OF_DOCUMENT_TOKEN_TO_BE_REPLACED 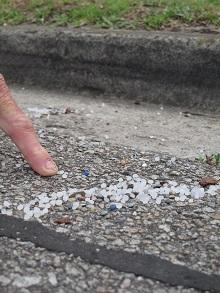 Microplastics have had a recent media upsurge with the Environment Minister Greg Hunt poised to follow in the USA’s footsteps and ban microbeads in beauty products. Also in the microplastics category are plastic resin pellets which are the raw material from which all moulded plastic items are made; they are slightly larger than microplastics (2-6mm), but just as dangerous to wildlife. They are mistaken for food and ingested and cannot pass through digestive tracts, leading to malnutrition and starvation.

When plastic pellets are spilt they are easily washed into stormwater drains which transport them to our natural waterways and oceans. In order to combat this issue an innovative program called Operation Clean Sweep® is being trialled in the Port Phillip Bay Catchment.

END_OF_DOCUMENT_TOKEN_TO_BE_REPLACED 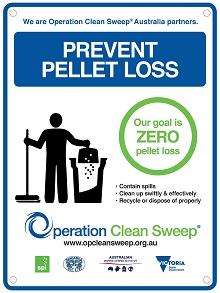 Operation Clean Sweep® Australia launched during 2016. An industry program developed in the US, and adapted for the Australian industry with funding from the Victorian Government’s Litter Hotspot Program and support from the Plastics and Chemicals Industries Association & Tangaroa Blue Foundation.

The Operation Clean Sweep® program looks at all the places during processing and transport that plastic resin pellets (AKA nurdles) can be lost and cost-effective strategies that would prevent that loss from occurring.

We are excited to annouce industry leaders (Dow Chemical, Qenos and Co-Ex Films) have taken the pledge to adopt Operation Clean Sweep® and help reduce the chance of plastic resin pellets escaping into the enviornment from their facilities. We urge everyone in the plastics industry to check out this program – it’s free, it saves companies money, creates a safer workplace, helps avoid fines and helps to protect our waterways and ocean!

Preventing marine debris is all about stopping it at the source. We are proud to have launched Operation Clean Sweep in Australia and would like to share with you our latest video showcasing how one of the first companies to sign up to the program in Australia has implemented it into their operations. A huge thank you to Co-Ex Films, Streamline Media Australia, the Victorian Government’s Litter Hotspot Program and the Western Australian Government’s State Natural Resource Management Program WA.