Really?! Clean-up the Great Barrier Reef?! The largest World Heritage Site on the planet and over 2000km long? We don’t know who first came up with this idea and how the story began, but we know how it continued since Tangaroa Blue Foundation got asked to coordinate it!

Not only was it the first ever GBR catchment-wide call to action for QLD residents to clean their own stretch of beach or waterway, but in an effort to involve communities along the coast, 11 sites between Cooktown and Bundaberg were going to be manned by Tangaroa Blue coordinators, and the events would include free lunches for all volunteers, educational stalls and media presence. Local councils, Indigenous rangers and several environmental organisations were also going to be involved.

A Maze of Logistics
CKThe Tangaroa Blue wizards behind the scenes had six weeks to make magic happen and pull this event off: Thousands of clean-up bags, gloves and sharps containers were ordered – together with a dash of paperwork the ingredients for any well organised clean-up – and sent across the state to everyone who had registered their beach for the big weekend.

Arrangements also had to be made for each of the 11 coordinated sites: Where was the nearest beach access, where any toilets? Who was going to start the BBQ and who was going to take the rubbish to the tip after the clean-up? How to organise free ferry rides for the volunteers to Fitzroy Island and how to give people directions to a remote site in Cooktown? 11 times bags were packed with clean-up gear for the Tangaroa Blue crew, 11 times kits were compiled containing every little bit that you could possibly wish for during a clean-up – from hand sanitiser to cable ties, 11 times travel itineraries were researched for the 13 coordinators. The team behind the computers faced the task with the spirit of dedication: Typing away day and night and often in their mobile office, i.e. squeezed together in a car on a long road trip to clean-up events with their laptops on their knees.

“Like your kids leaving home”, Angelika Volz, one of the Tangaroa Blue crew, commented when two days before the big weekend all the team leaders swarmed into the office to pick up their allocated equipment that had been packed and waiting there for weeks. Suddenly, in a calm before the storm, the once cramped office was empty and there was nothing the organising queens could organise any more – it was “each to their own”. For the next few days the crew would be splattered along 1300 km of the QLD coast steering their own ships of marine debris advocacy. 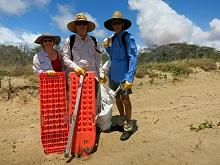 And how they steered it! Over 600 volunteers cleaned up more than 5.5 tons from beaches, islands and river banks, remote locations and residential areas alike. Over 350 bags were filled and every team had stories to tell: In Mackay they pulled two laptops and chargers off the beach, in Yeppoon a truck wheel so heavy that they had to get a backhoe in the next day to lift it onto a truck. And since the weight slightly exceeded our handheld scales a quick photo was sent to a tyre specialist for an accurate weight assessment – to get the most reliable data for the Australian Marine Debris Database. The team on Fitzroy Island spontaneously roped in 40 students to assist with the clean-up and the helpers in Gladstone took some of their findings proudly home – including a mattress (for mum), a skate board (for the kids) and new max tracks (for dad)! In Rockhampton the weekend came with a twilight creek clean-up (nocturnal rubbish spotting with torches) and during the clean-up in Bundaberg more than 5km of fishing line was pulled out of the mangroves. The GBR Clean-up was kicked-off in Townsville the week before where the findings clearly showed what that beach was used for: dog poo bags, sanitary items and adult’s toys (we will leave the details to your imagination). In Elliot Heads, one of the self-managed sites, 12 volunteers pulled 1800kg of a burnt and melted conglomerate of something off the beach that had been illegally dumped there. “This stuff had been sitting there and waiting for the right opportunity to come – the Great Barrier Reef Clean-Up. It was my pleasure to get my hands dirty and make a change”, Kris Hall, the coordinator in Elliot Heads, commented.

The Aftermath
ck2After just ticking over the 5,000,000 item mark in the Australian Marine Debris Database during the event in Townsville, the Great Barrier Reef Clean-up propelled the program another big step forwards. “The data enables us to identify hotspots along the Great Barrier Reef as well as type and origin of the rubbish collected to help create source reduction plans with the local community and government, thus working towards preventing the litter from ending up in the ocean in the first place”, Heidi Taylor, co-founder of Tangaroa Blue Foundation explained.

Almost as countless as the items collected were the event supporters during this weekend – from local councils removing the rubbish, to local organisations providing lunch or Aboriginal rangers helping out with their quad bikes – too many to list here. We want to send out a big thank you to everyone involved and to all the dedicated volunteers that helped preventing over 5500kg of rubbish from re-entering the ocean!

Keep up the spirit and keep your clean-up bags ready just in case in 2016 someone comes up with the crazy idea “let’s clean up the Great Barrier Reef!”

View all posts by Heidi